Arrived at last at Phnom Penh after travelling the whole day on the amazing Mekong River from Vietnam.
The capital of Cambodia, Phnom Penh, is a great mixture of wide boulevards with fancy restaurants and shops, and small alleys with street food and lots of locals. You also have some beautiful temples and great markets around the city.

Since we’re super-tired of big cities, we tried to do most of the sightseeing in one day.
So we rented a tuk tuk that took us around to the Killing Fields of Choeung Ek, where you see a glass tower with more than 8000 skulls and clothes of victims from the Khmer terror that took place in the 70’s. Several mass graves where thousands of men, women and children were tortured, killed and buried.
It was one of the worst places we have been. It really gets you thinking.
Pol Pot and his regime wanted to start a new country, where they started over with year one. Literacy, art, music and religion where all abolished. Any person that was educated was instantly executed.
More than 2 million people died during his regime (ca 40% of the population).

After some depressing hours at the Killing Fields, our tuk tuk took us to the Russian Marked, before we continued to learn more about Cambodia’s awful past at the Tuol Sleng Museum.
The former high school was taken over by Pol Pot’s regime, and transformed into a prison and the place for unimaginable torture, called Security Prison 21.
Here we could see torture chambers, torture tools and lots of awful pictures. 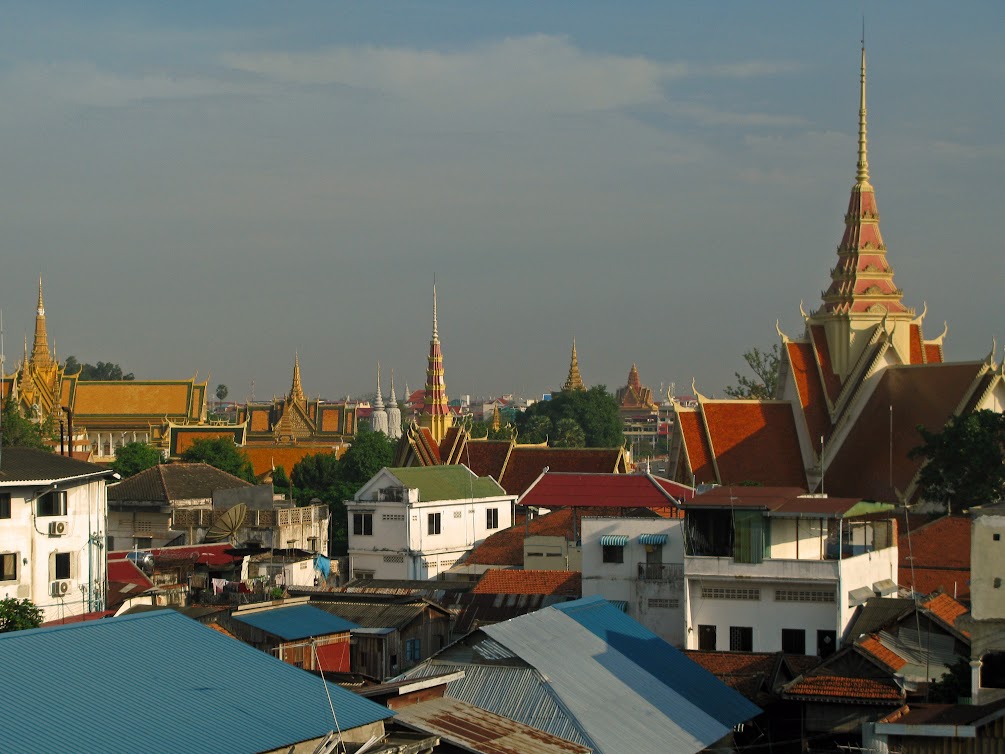 After all the depressing sights in Phnom Penh, we really needed to do something else, so we jumped on a bus taking us to Sihanoukville. A touristown by the coast, with sandy beaches and good party vibes.

The Serendipity beach (closest to where we stayed), could be a really nice beach if you ignore all the garbage and all the kids trying to sell you stuff ALL THE TIME!
Anyway, we stayed up partying on the beach until sunrise. And had a great time.

Unfortunately we had a sad incident in this area. Our good friend Di, from Australia, got mugged by 3 guys with knife. And we heard several stories about mugging, rape and assaults, meaning you should never walk alone here!

Sokha Beach was a beautiful and clean beach. But it’s private and you have to pay 5 dollars to be there, but then you can also use the pool. So crashing this place made our day, no kids selling stuff & stealing from us. 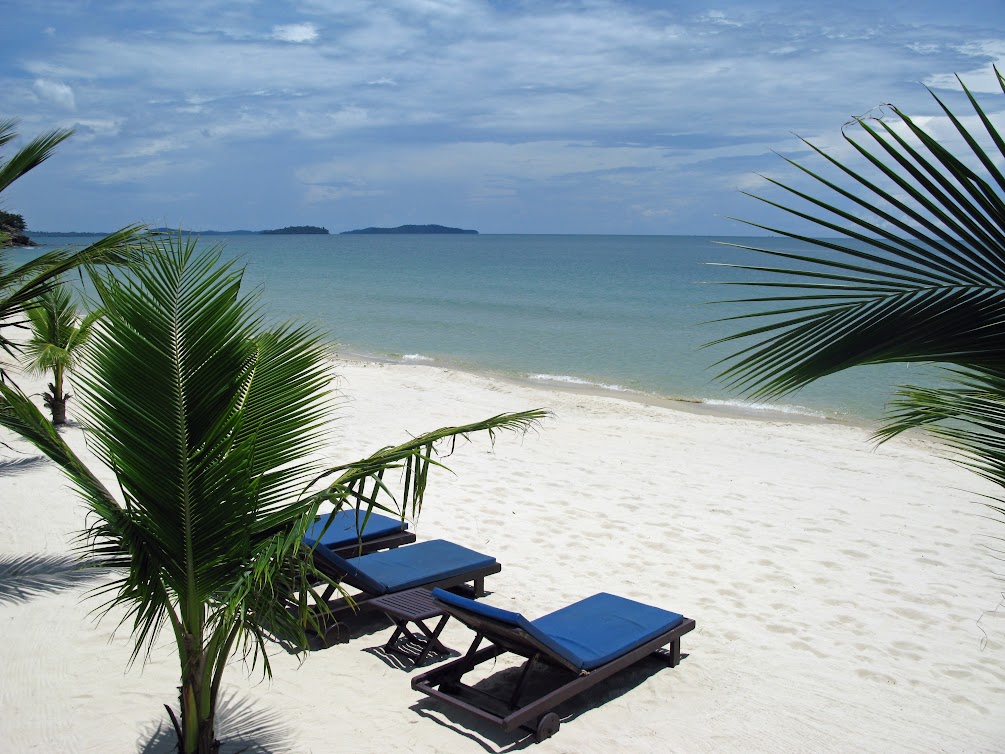 The temples of Angkor is the main attraction in Cambodia, so after 4 days in Sihanoukville we took the bus to Siem Riep. (about 10 hours).

Staying at a really nice place, Earthwalkers was a really great choice (thanks Artchie for the tip). Actually run by Norwegians, so it was great fun to hear Norwegian music and read Se & Hør againin addition the hostel also have a great pool and wireless internett, what a place!!

Angkor Wat is the national symbol for Cambodia and also one of the 7 wonders of the world, and seeing the sunrise (5am) over this amazing architectural pride was one of the highlights of the temple area.

Angkor Wat is surrounded by a wide moat and enclosed by a wall. The centerpieces are five towers representing the peak of Mt Meru, and the tallest was the home of Vishnu.

Angkor Thom is surrounded by a 8m wall, but inside this walls lies some of Angkor’s most important monuments; The Bayon, The Terrace of Elephants and The Terrace of the Leaper King.
The Bayon was the King’s state temple, it has 54 towers with together 216 faces carved in them.

The most special temple we went to was Ta Prohm. Build in AD 1186 by King Jayavarman, and dedicated to his mother. Situated in the middle of a jungle, the walls are decorated with carvings with huge treeroots growing on top of the ruins. And we’re talking super-huge roots and trees!!! what a sight!!

Our tuk tuk driver for the day, drove us around from temple to temple for 10 hours! It was a really great day!!!

In Siam Reap we saw the Old Marked(great marked but we’re kind of starting to get REEEEAAAAALLLLLY tired of all the freaken markeds wich is fu… everywere we go!!!!!!).

Before leaving this historic country we went out having our last party until the early morning before heading to Thailand, wich is our next blog…

And yessss, we’re still having a great time travelling the world!! 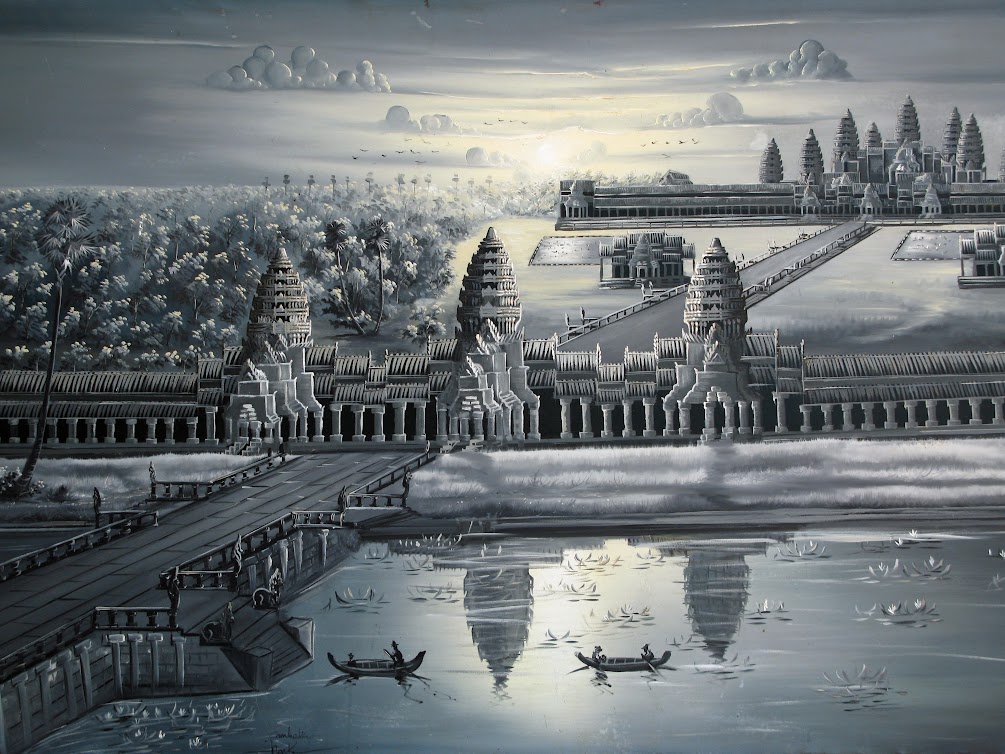