After operation”see all of the pacific”, it was time for us to start thinking of returning back home to the cold & snowy Norway after a fantastic one year of kickass traveling around the world!
But first Marianne wanted to experience Los Angeles, and since Borre has been there many times before she got the perfect guide to do so..

To “acclimatize” a bit before heading back home, we spent 5 days in this great city of angels, Los Angeles!!

After a long flight from Papetee, Tahiti, we arrived at last LA early in the morning, to early of course for check in at our motel, ‘Vibe motel’ on Hollywood Boulevard.

What else to do than check out this crazy fun city, so we vent for a long walk along the famous “walk of fame”. Suddenly we had The Kodak Theater & The Chinese Theater in front of us, great stuff! Really exciting to see all of these famous places in reality! We’ve all seen them on TV, Academy awards and stuff.

Went a bit crazy with the camera shooting “stars”, fancy cars, The Hollywood sign etc..
Of course, being in this city, full of amazing shopping opportunities, we had to do some serious shopping!! After one year trying not to shop to much it was finally time to go crazy!!! And so we did!!! Clothes, SHOES, make up (yes make-up only for Marianne,NOT Borre,ok) and all kinds of stuff!!! It was really GREAT!!!

Although after a year of travelling there’s not much money left (again Mariannes world, ha ha), but whatever’s left we’re spending it here!!!

After exploring Hollywood, shopping and partying on Sunset Boulevard, it was time to see some more of LA. 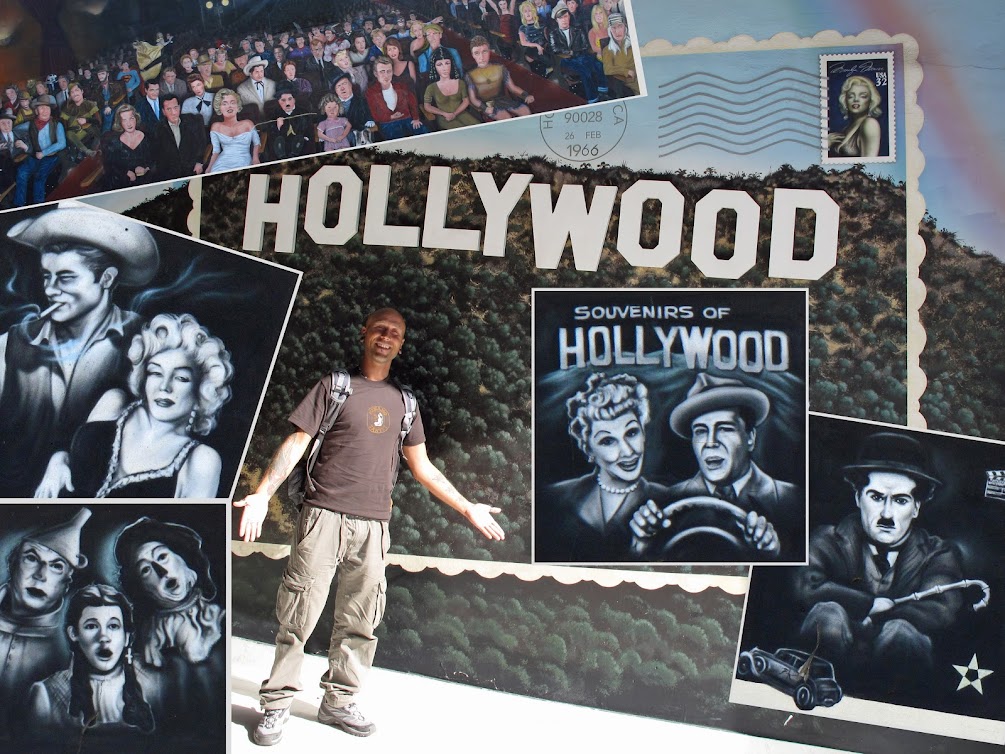 We jumped on a bus heading for Venice. 1, 5 hour later (big city!) we had the famous Venice Beach in front of us..
At the crazy board walk of Venice Beach you’ll experience street entertainment at every intersection along Ocean Front Walk. Street performers include instrumental musicians, singers, jugglers, acrobats, mimes, comics, magicians, prophets, fortune tellers, and other assorted entertainers. You will see people with tricolor hairdos, painted faces, weird tattoos, and outlandish clothing–or lack of it. What a special place!!

We vent for a long walk along this great Oceanside all the way to Santa Monica pier.
Lots of crazy people, funny shops and all the time Marianne was waiting for one of the hot “pacific blue” bike police guys to show up… but they never did…ha ha.

Beautiful sunshine and a great day!!
Back in Hollywood, we decided to go for a “typical stupid tourist trap tour”, a open roof bus trip to see all the celebrity houses in Beverly Hills. We saw the homes of Tom Cruise, Dr. Phil, Michael Jackson, Leonardo Di Caprio, Beckham, Paris Hilton etc etc..
We also got to see famous restaurants, bars, nightclubs, and of course we went for a stroll on the famous Rodeo Drive were Marianne had to buy a VERY expensive souvenir; clothes stuff! 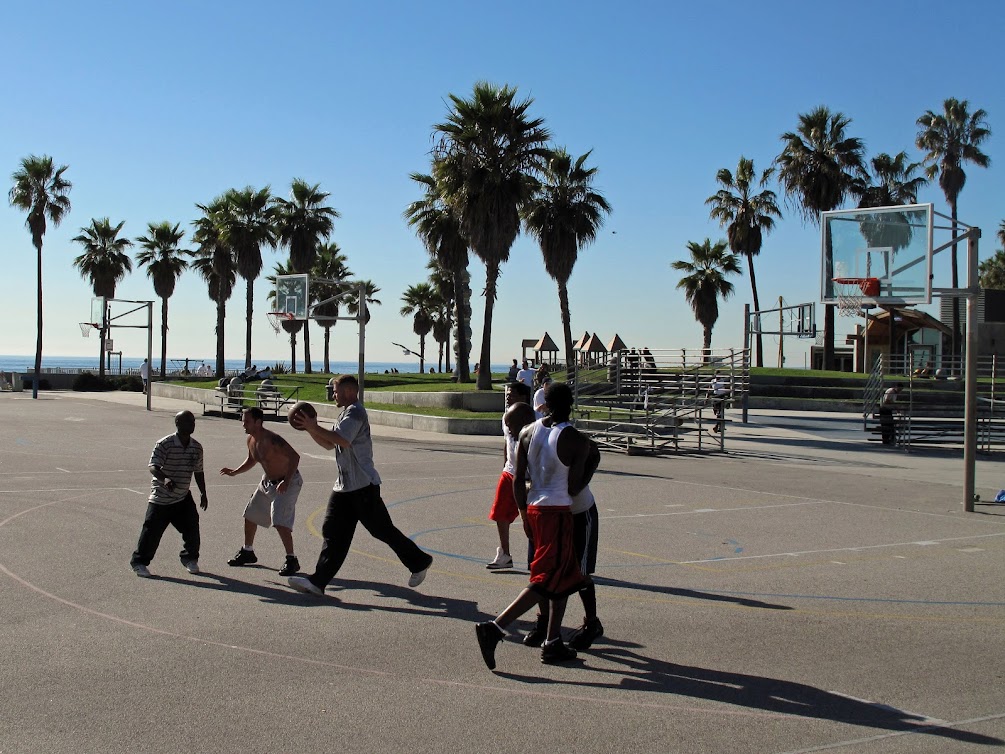 Our last day in LA we decided to spend at Universal Studios! And what a great day! We saw a lot of famous movie effects from The terminator, the mummy, Jurassic park. We walked thru the house of horrors and saw a lot of fun stuff.
And of course we went for a studio tour. Universal studios is the worlds largest working movie studio and we could really get behind-the-scene. We witnessed the eeri smoldering plane crash from War of the Worlds, we drove by the set of Desperate Housewives, and saw car chases and explosions from The fast and The Furious. An amazing day!!! 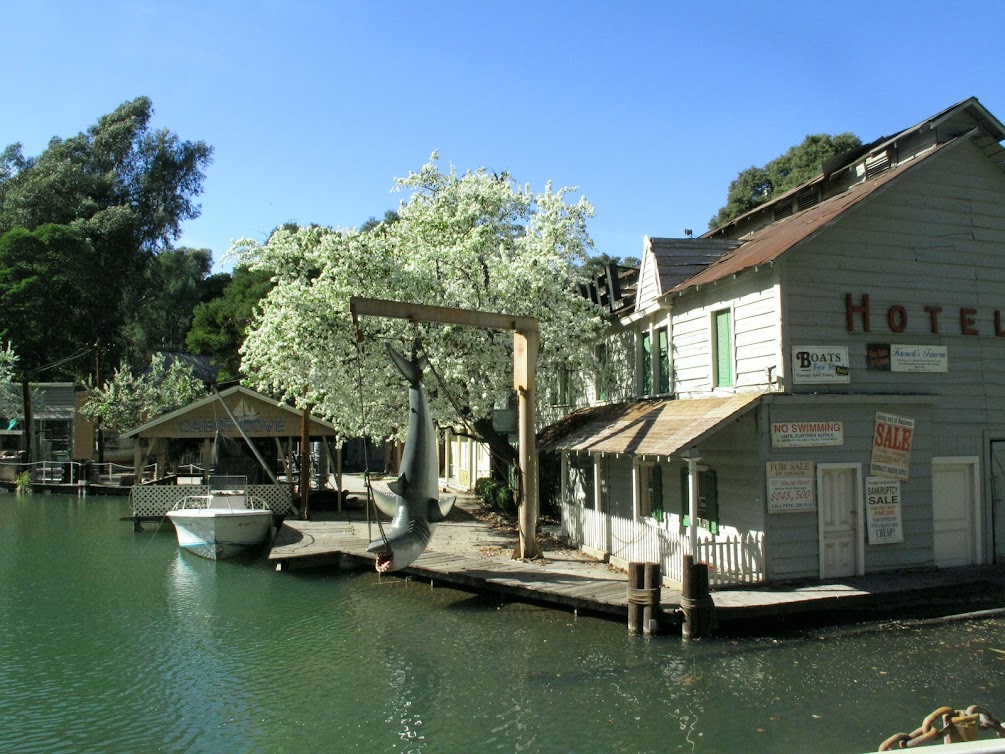 Our 5 days in LA came to an end, and a loooooong flight back home to Norway is what’s left of our amazing & wonderful one year of traveling!

But don’t worry, we’ll travel more!! Just have to go back to reality and a «normal» working life to save up for our next adventure!!!!