New Zealand’s spectacular scenery and it’s great outdoor activity took us from east to west, to south and at the end up north, during the 5000km drive with our perfect little sleeper van..
You have to love this country with its enormous mountain range, pristine beaches and glaciers in-between. From Palm trees to snowcapped mountains you feel like going summer to winter and back again in a few hours.. Love this country!!!

In short words: New Zealand; 4,2 million people,40 million sheep, God knows how many cows, a couple of Lamas, Mountain Parrots(Kea), Penguins, Sea lions, Fur seals and a bunch of dead Possums along the road ..Yes, that’s some of the things we saw in the amazing countryside on our drive thru this beautiful country.

Arriving Christchurch in the middle of the night from Thailand, freezing and tired after 24hours travel, not able to get in to our hostel(they forgot to e-mail us the door-code),made the first night a little bit frustrating..

Well, after a good night sleep (in a different hostel), and a bit of sightseeing it was really good to get our sleepervan we had hired for 28days and start our “operation see-all-of-NewZealand”. 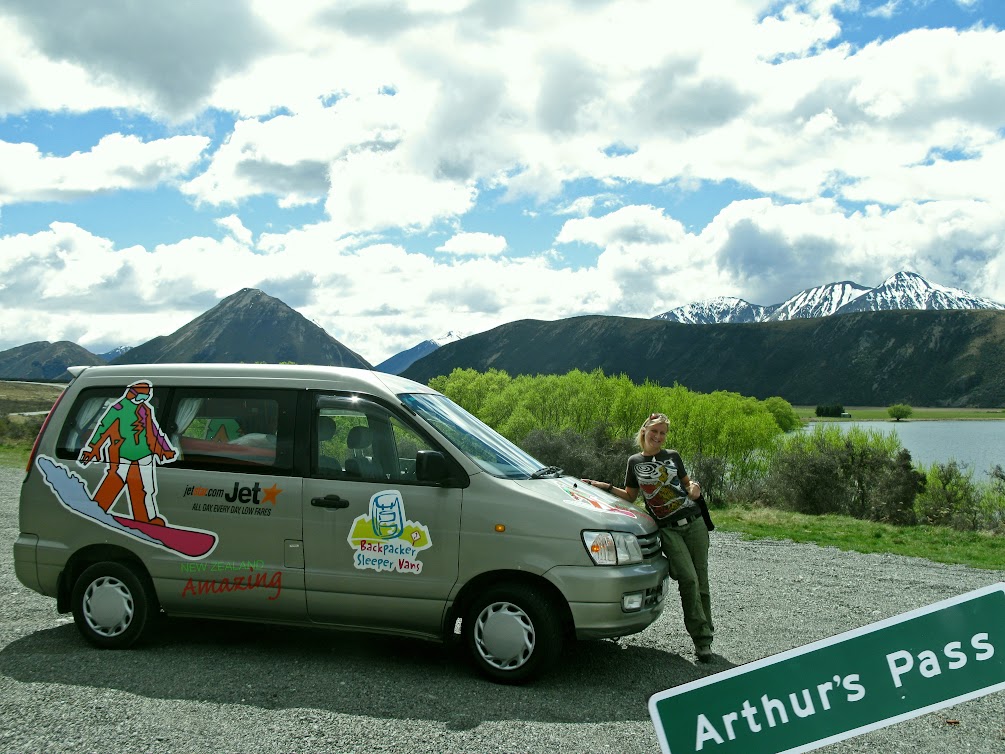 After Franz Josef & Fox Glacier we spent the night in Haast, before heading thru Haast Pass(where it actually was snowing) and the small and beautiful town, Wanaka, before passing thru Cardrona’s ski area and ending up in Queenstown.

Queenstown is the “global adventure capital” were most visitors do crazy things they never done before…example; parachuting, bungyjumping, hangliding etc..Sounds really great to do all that if we only had a short travel & lots of money to spend…but “luckily” the bad weather and time schedule made us move on after a couple of days so we saved all of that for another time. 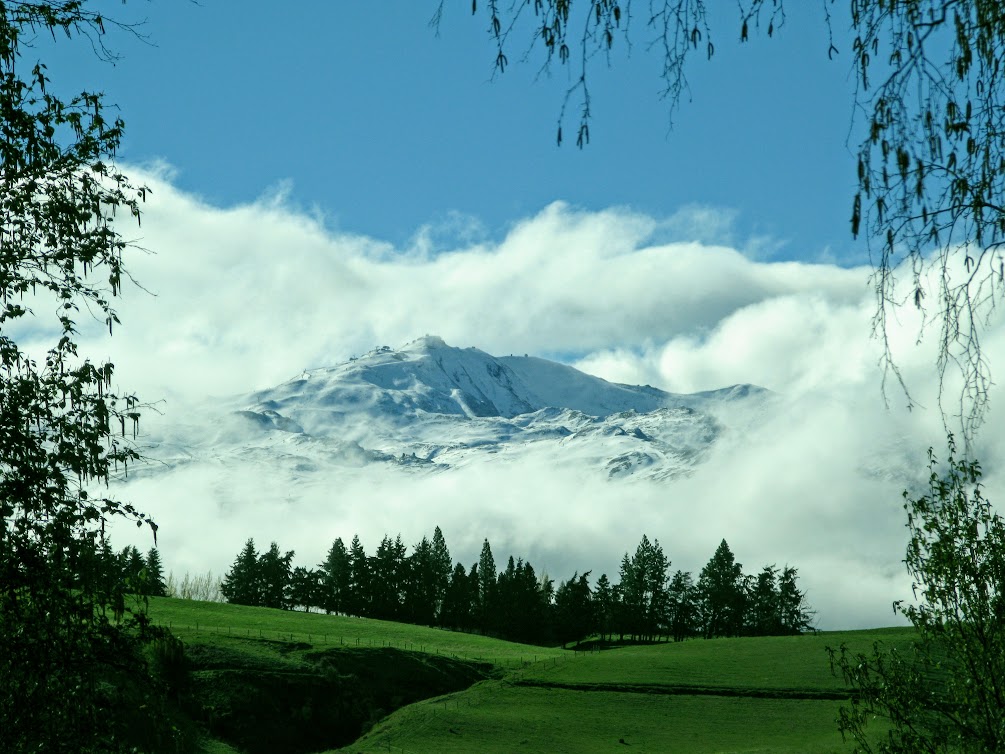 Further on our drive we headed down to the southernmost town, Bluff and drove the southern scenic route thru the Catlins to Dunedin on the east coast..

Seeing the Penguins and Sea Lions at Otago Peninsula, made our stay in this beautiful place.

Back to the mountains and Twizel & Aoraki/Mount Cook National park for a bit of hiking and fishing..
What a great walk to the foot of Mount Cook (highest mountain in New Zealand and AustralAsia with it’s 3755m), and ending the day with catching our own dinner,2 medium sized Rainbow Trouts. A must to say that Marianne made the best meal so far on this trip,niiice!!

From Twizel we drove the inland route to Kaikoura with a couple of great stops along the way, Lake Tekapo with its view over the amazing colorful lake and Mnt.Cook NT in the background.

Kaikoura is known for its marine wildlife, so we had go for a walk around the peninsula and have a look our self. Saw a lot of Fur Seals and Albatros along the way,cool stuff!! 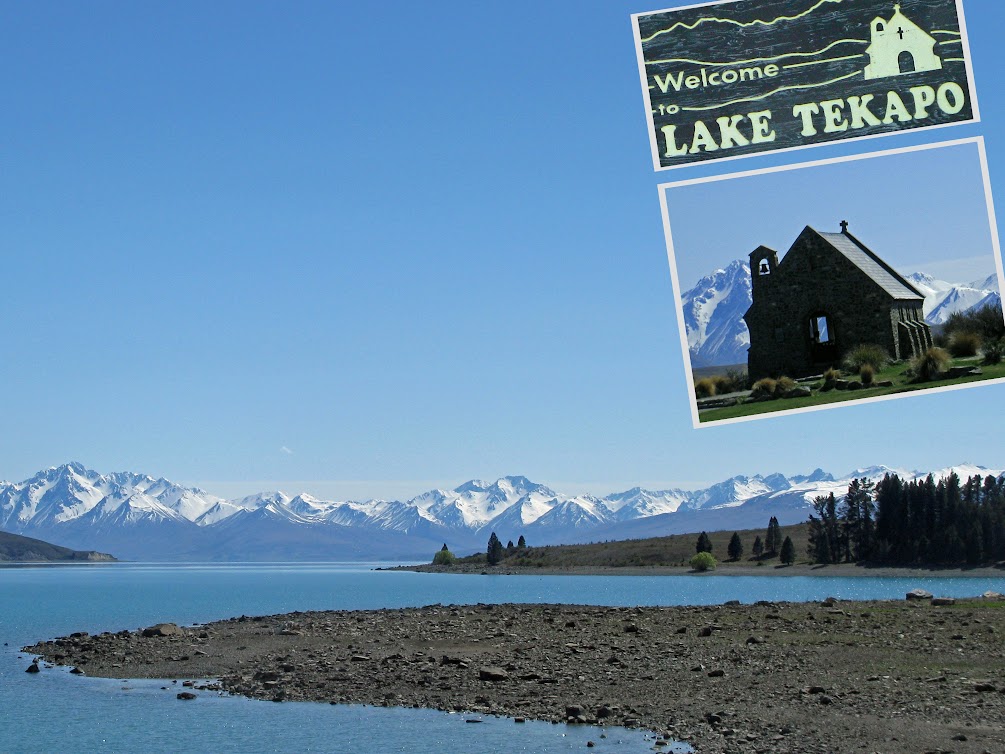 In northern part of the South Island you can explore the national park of Abel Tasman, and yes we did after spending a night in the beautiful town of Nelson. Had a day walk were we saw amazing shorelines and great forest. Recon this is a perfect place to camp during the summertime when the weather is warmer. 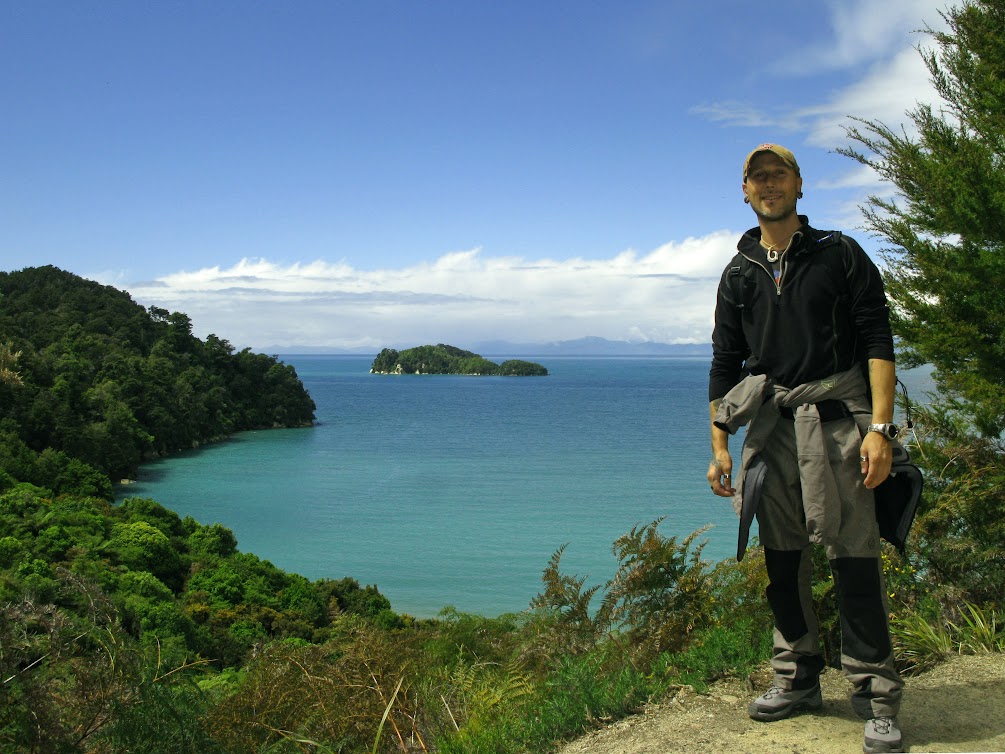 After 2 weeks in the South Island we had to move on to Wellington and the North Island.
Wellington, the windy capital of New Zealand was really a beautiful city by the sea, so we spent a couple of days there before heading to Tongariro National Park and Lake Taupo for fishing (again). What beautiful scenery…the pictures speaks for itself!! 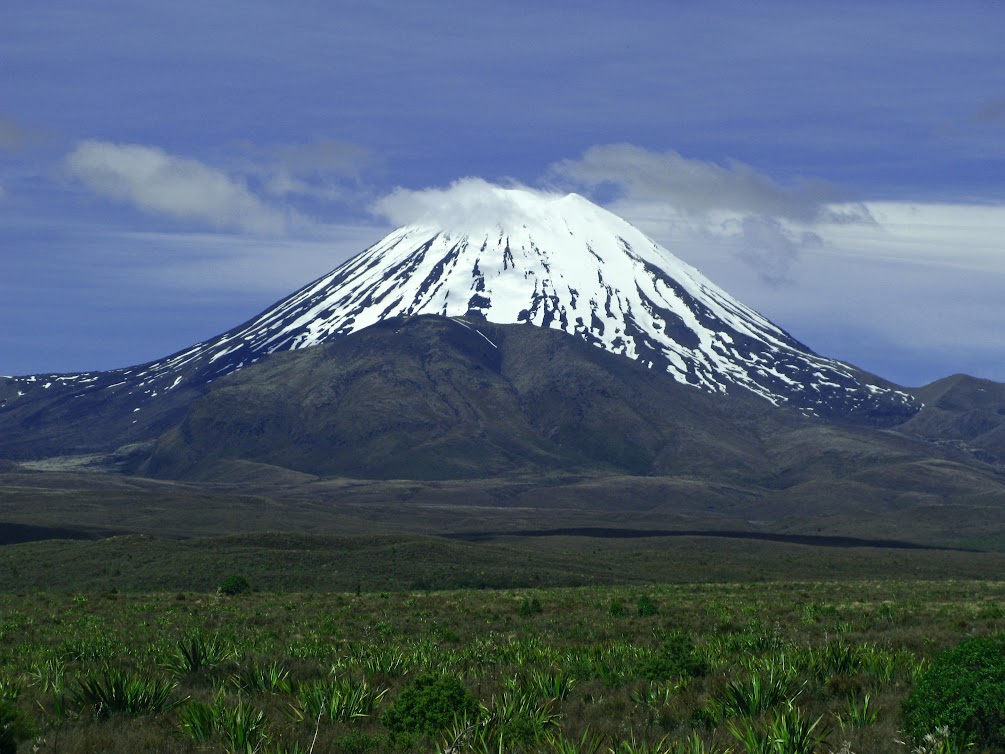 On the way to the Surfingtown of Raglan, we had a stop at Rotorua and Te Puia (Maori museum) and learned a lot about Maori culture, quite interesting actually.

After some really bad fishing experience in Raglan (lost a freaking fortune in hooks), we moved on to Whitianga were we got kind of stuck for some days..Relaxing and enjoying our stay at Cats Pyjamas Backpacker was really great after all this driving.
We could actually sleep in the van outside and use the facilities for a small amount of money, which made our beer budget rise REALLY high!! Sue, the host made a perfect barbeque the day before we left that really “made our day” as well. 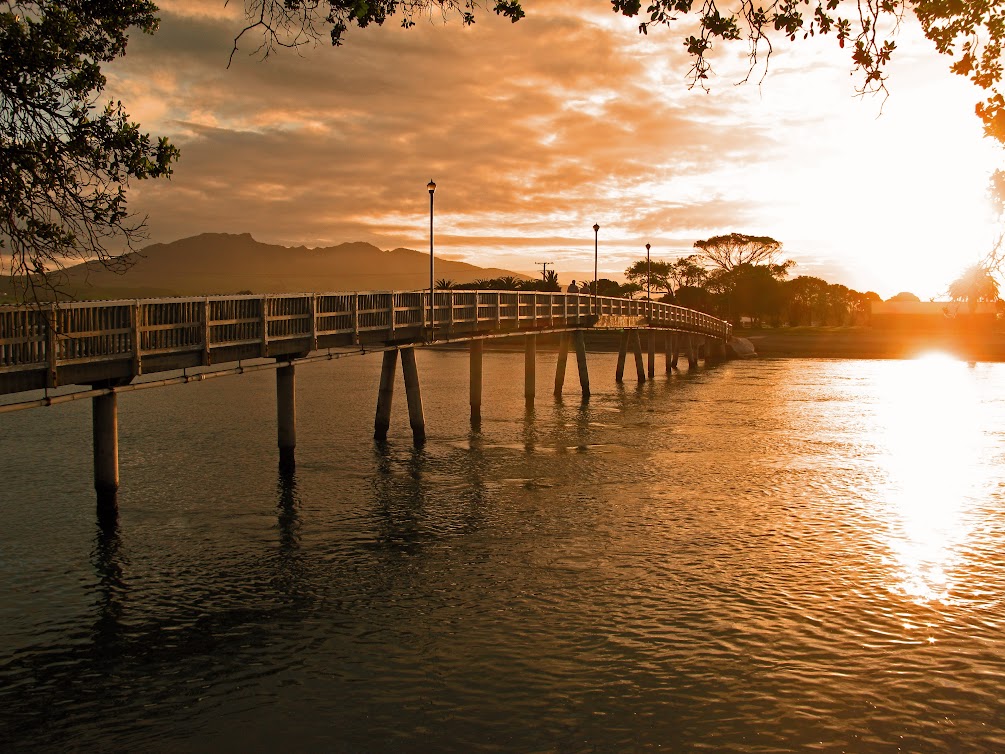 Further we drove past Auckland to Bay of Islands and the small town of Pahia faaar up north..Had to sleep before heading to our destination; Cape Reinga, the northern most point of New Zealand!!

Yess, we made it to the northern tip of New Zealand!!
Took a bunch of pictures before starting our drive down to Auckland again.

After some great scenery, a ferrytrip and one of the biggest trees (Kauri tree) we ever seen, we spent a night at Orewa before returning the car in Auckland..5000km, not even a parking ticket, yess we had to celebrate, meaning beertime!!

Luckely Paula & Adam (that we traveled with on the Transeberian & parts of China)was in Auckland at the same time, so we met up for a couple of nights with beers and shots, great fun to meet them again!

From Auckland, our trip went further to paradise; Vanuatu Is in the Pacific Ocean, were we are now, enjoying this tropical paradise and the start of Island jumping the Pacific for 3 months…but that’s for the next blog. 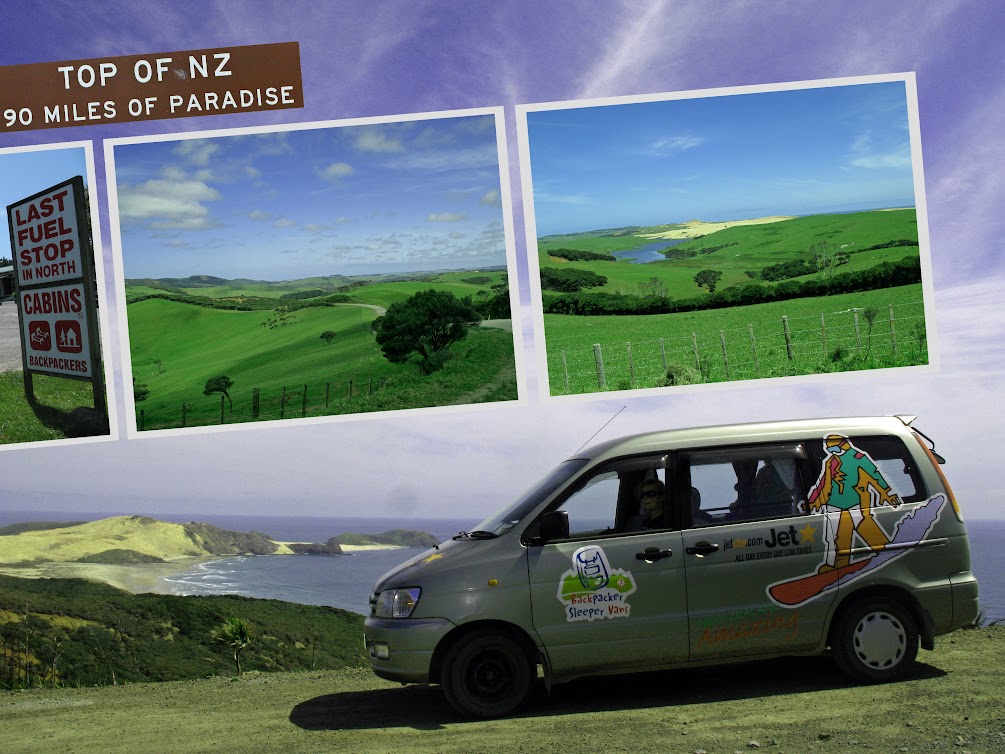