Russia: Transiberian railway, St.Petersburg, Moscow, Siberia, Irkutsk, Lake Baikal, Ulan-Ude  23.06.2008
To all of our friends from Norway: we got to write english from now so all the friiks we meet on our kickass-tour can understand..
After a 9 hour night train tour from Tallinn(Estonia),incl 2-3hours on the russian border, we arrived at last in the beautiful city of St.Petersburg.
Our first day basicly went to find a place to stay, which turned out to be quite a hassle because of the school graduation vacation there..we didn’t do much more than walking around and having our first Russian drink:vodka (of course), that day..
Rest of the stay we walked quite a lot to explore some amazing old buildings and sights inspired by Peter The Great such as: dominating the skyline,the colossal bronze dome of ‘St Isaac’s Cathedral’(amazing view of the city from the top) & ‘Winter palace’(boring). From a bridge we saw ‘Peter and Paul fortress’ before we went in to the superbig ‘Hermitage museum’..,what a great museum, with one of the world’s biggest and most splendid collections of fine art from around the world. Endless corridors pact with gold,paintings etc made it a looong walking tour for hours, even though I don’t think we saw more than half of it, or less..A canal-sightseeing by boat was also on the menu..,but it was really boring(I actually fell asleep), specially because of the rain that day..The main street ‘Nevsky Prospekt’ also had some great sights: The big ‘Kazan Cathedral’, but the best sight was definitely the colorful ‘the church of the spilt blood’ witch is set up on the spot where Alexander II, the Emperor of Russia, was mortally wounded on 1 Mars 1881..
On the 3 day we met up with the group and tourleader for preparing our big traintrip, the transiberian & transmongolian taking us all the way to Beijing, China..
What a bunch of hippis,ha ha..,just kidding, great people from Australia, England, Germany & USA..Our first night we went to have a great Russian dinner and drinks at a local restaurant close by..Super night with a lot of beer..,and some food!!
The day after we prepared for our first traintrip, taking us to Moskva on 3class nighttrain. Great fun, within 5 minutes the first vodka bottle was standing on the table,perfect!!, brought by some drunk Russian guys.. The sleeping cabin was open,with no doors,like a dorm somehow.. yes,really crowded with people but still fun. 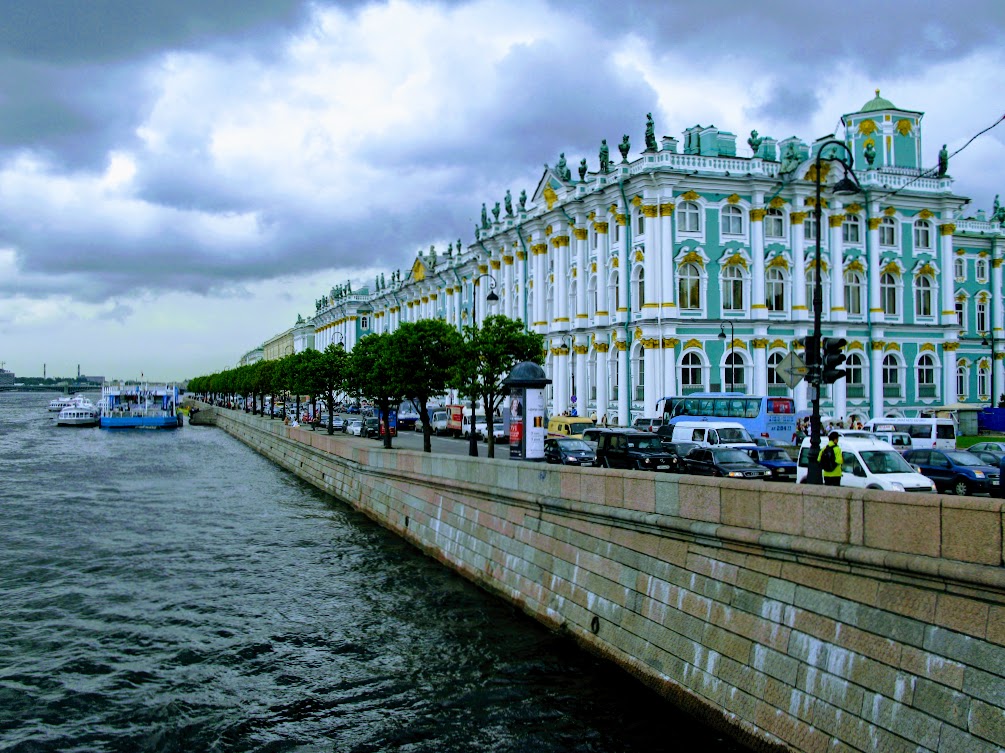 Next morning we arrived in Moscow. Tired from the “vodkatrain”, we spent a couple of hours taking a shower and had breakfast before we started sightseeing around the city. Our first stop was the Tomb of the Unknown Soldier, then the huge Kreml. Several churches, a welldressed man with a sniperrifle (!!), the world largest canon, that of course never had been used, and the same with the world largest bell. Børre went bananas with his camera of course, and it didn’t get any better when we came to the red square (Børre called it ‘the pink square’ of course). In one end of the square you have the perfect(to perfect,like a painting) building of State history museum, at the other end,the famous St.Basil’s Cathedral with it’s colourful domes and stonework decorated with intricate patterns. Along the side of the square you have the remarkable glass-roofed GUM shopping arcade constructed in 1894..amazing big shoppingmall with brand names shops, not a place for us!!We ended our day in Moscow with being stopped by corrupt shit-police that wanted money to let us go( Marianne, Børre & Øystein), after 30 min they finally let us go with the help of a nice Russian guy..puuuheee. Finally we could join the rest of the group and enjoy a Russian buffet at a great restaurant before we went back to the red square,again.. Beautiful lightning of the buildings made Børre go crazy with the camera again. 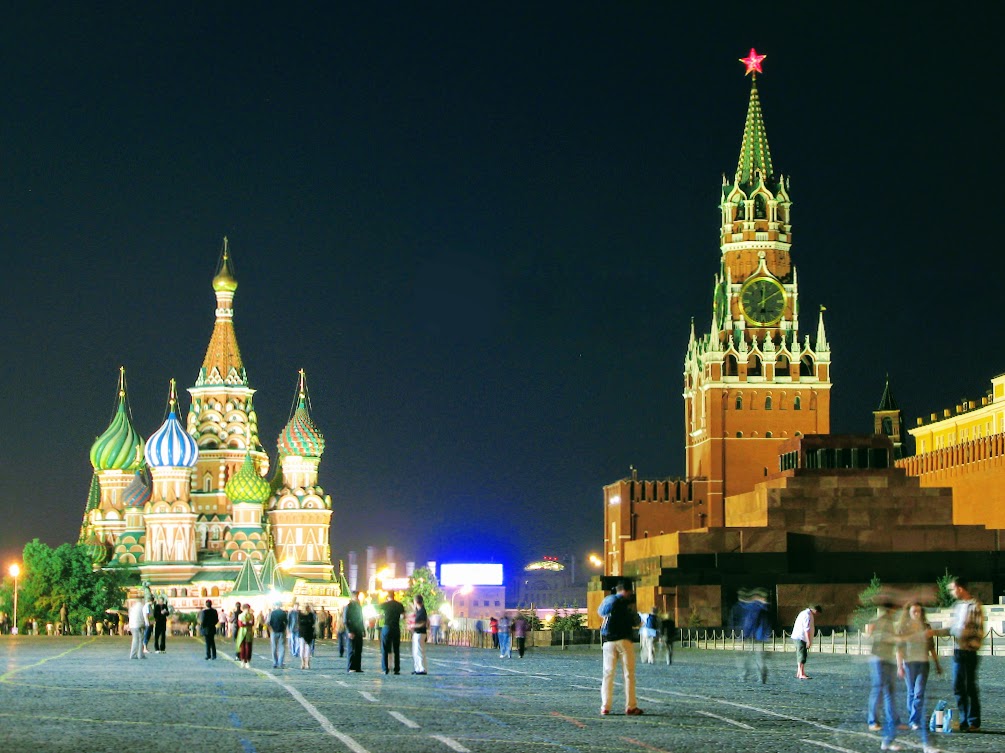 Back on the train for a 4 days journey..beer, vodka and rock & roll most of the journey..at almost every stop, we went out buying beer’s and stuff from babushka’s .. Days and nights passed by and from our cabin we saw a lot of Russian villages, great nature sceneries’ and beautiful sunsets..and don’t forget; trees,trees and trees!!! Life is beautiful!! After crossing 5 timezones, 4 nights and 4 days from Moscow, we closed up on Irkutsk..at last!! 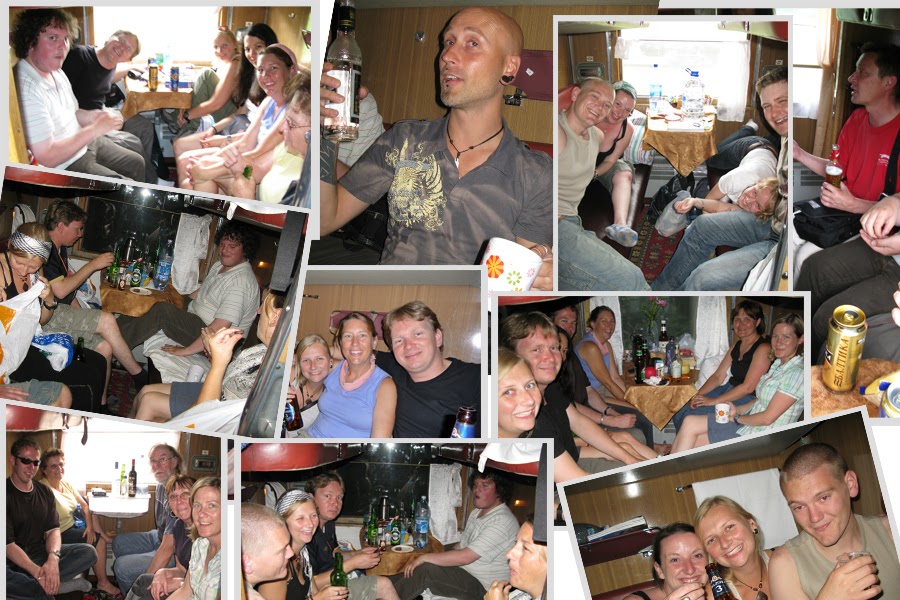 Irkutsk is the closest big city to great Lake Baikal. The city itself is quite boring, although after passing the market street, there was some old traditional buildings that was worth a look, and further down the street you have the huge Lenin statue. After walking by the river banks, we went to the supermarket before heading home for delicious homemade pasta Bolognese made by Marianne!

Lake Baikal is the world’s deepest lake, 1637 m, and also one of the biggest, 636 km long, 60 km wide!!
Our journey to the “pearl of Siberia” was a great experience with it’s treeless mountains and rural Siberian villages. After about 5 hours with minibus, we took a boat over to the beautiful island of Olkhon. We spent a couple of days in a small and simple village (wich got it’s electricity as late as 2005) by the lake cliffs, a perfect place for a beautiful view of the sunset, the lake and the nature surrounding. Had a swim in the super ice cold lake, and added 25 years to our life(according to the belives)!!
A great party with bonfire and lots of beer and vodka was a must, and we kept it going until sunrise! Life was defiantly beautiful on this island, but we had to move on…. 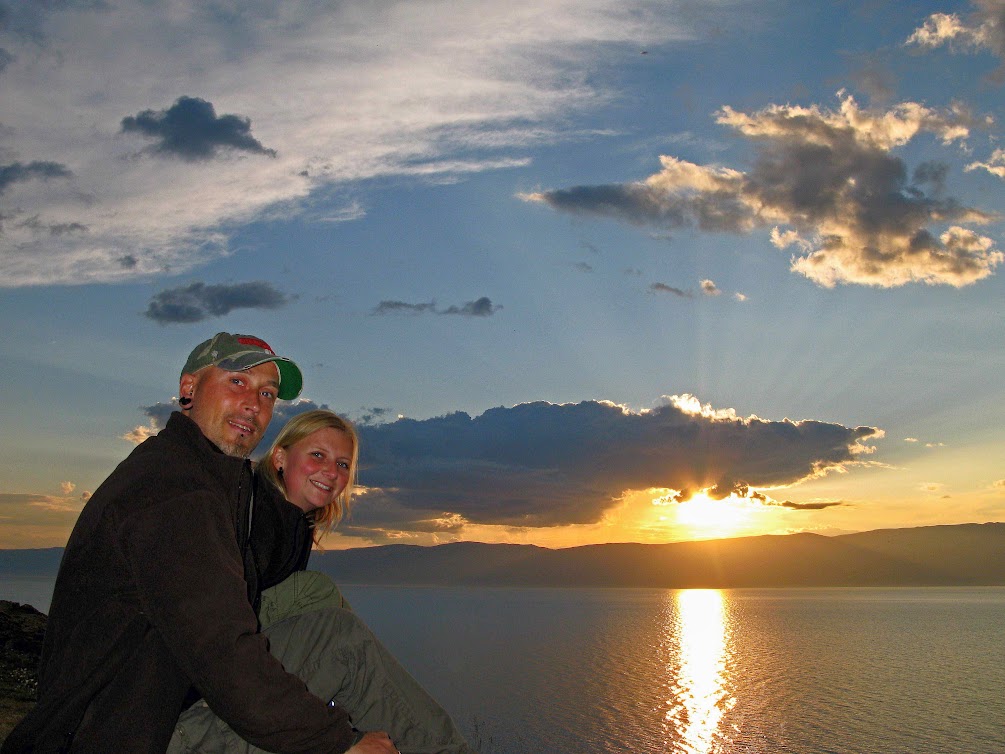 After a night in the train we got early to the ‘secret’ city of Ulan Ude, the military city which was closed to foreigners until 1991(It actually has a whole ‘city’ under the city we was told)..At this place we stayed in home stay, meaning we lived with a local Russian family, what a nice family..The breakfast was on the table when we arrived and they had a real shower with hot water!!! After a nice shower and some laundry-stuff, Borre went out playing soccer with the kid in the family..,and of course he had to injure his foot..,so it went reeeaaaal slow with him this day..,mainly spent the hole day at a internet café, except for seeing the world’s biggest Lenin head, KGB building etc though..The rest we spent at the homestay were I was eating pills for the swelling of my foot..Marianne tried to be a nurs..,but it turns out, nursing is really not her thaaang..ha ha

After some hours sleep, we jumped very early (5’ish) on to the train going to Ulan Bator, Mongolia..After some hours journey,we approached the border were we was stuck for about 9,5hour during the transfer to ‘the other side’..haaaate & booooring!!!, even the friken toilet was closed most of this time..
At last we’re in Mongolia were we had to wait some more…..again…..

More about Mongolia in our next blog: Mongolia with transmongolian. 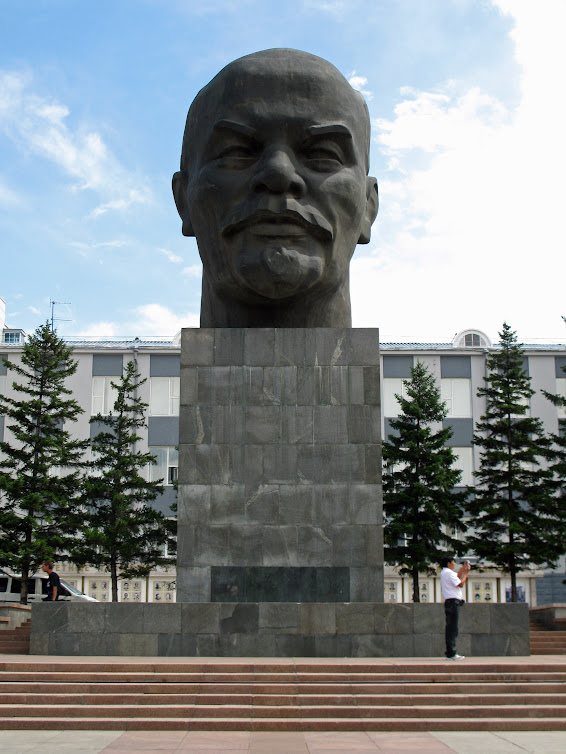