After some great travelling in the U.A.Emirates it was time to continue our adventure in Oman.
Crossing the border on foot, with a baby stroller in between all the cars driving in line, was a strange but funny experience…
I recon all the people staring at us thought we were lost tourists…ha ha!

After a super-warm crossing in the 40 degree desert sun and a visit to the border office, we finally made the crossing from Al Ain(Emirates) and into the Omani border “city” of Buraimi.
The bus to Sohar wasn’t going until 5 hours later, and that’s TO LONG time to kill in this really boring desert «city», so plan 2: ‘Long distance taxi’, a common transport were people jump in and out of the car along the road.. A great way of transport and a great way of meeting the local people.
The ride from Buraimi to Sohar was great, driving on a well kept highway with hardly any traffic at all. Straight thru the deserts with mountains, historic forts and some small villages. And as Oman is a very religious country, the driver had to stop and pray on the way.

Finally in Sohar we checked in to Al-Wadi hotel, a great choice if you want a cheap hotel with an ok pool not too far away from the city center.

Sohar is definitely the most developed city in Sultanate of Oman outside the capital Muscat, and the city used to be the ancient capital of Oman.
Having a rich sailing history, Sohar was traditionally a fishing town, today Sohar has one of the countries prettiest seafronts and is becoming a wealthy city due to good development the resent years.
Many still believes the city to be the birthplace of Sinbad the Sailor, a semi fictional sailor believed to be a fantastic adventures going to magical places, meeting monsters, and encountering supernatural phenomena.

The beautiful Sohar corniche is a perfect start for exploring the city, and lies some 3 km away from the highway and the hotel we’re staying at. Again we realize the super cheap “taxis” are a great thing in Oman, and stopping one at the highway wasn’t any problem at all. Even if the car was already packed with people and stuff, and nobody could speak a word of English, the driver would always stop and wave us in with a smile, love it!!

Sohar, being a city with absolutely no tourists made the walk around the city, and our first impression of Oman great! Love the feeling where it’s only us and the locals and no hassle at all. You just have to love this beautiful place!!
After a short stop at the “famous” Sohar fort we went for a long walk along the beautiful corniche marveling Sohars glorious beach that goes on for miles and miles, watching kids playing soccer, a guy walking his ox(??) and locals going on with their daily life was a great way to get “a feeling” of this relaxed city.
Having a coffee break at a small café run by an Indian guy wasn’t the best option though. Some of the elderly men started screaming and left in anger due to Marianne, a woman sat down in a “man dominated” café…ha ha! Well, enjoying the red sunset over Sultan Qaboos Mosque made the end of this day perfect!! 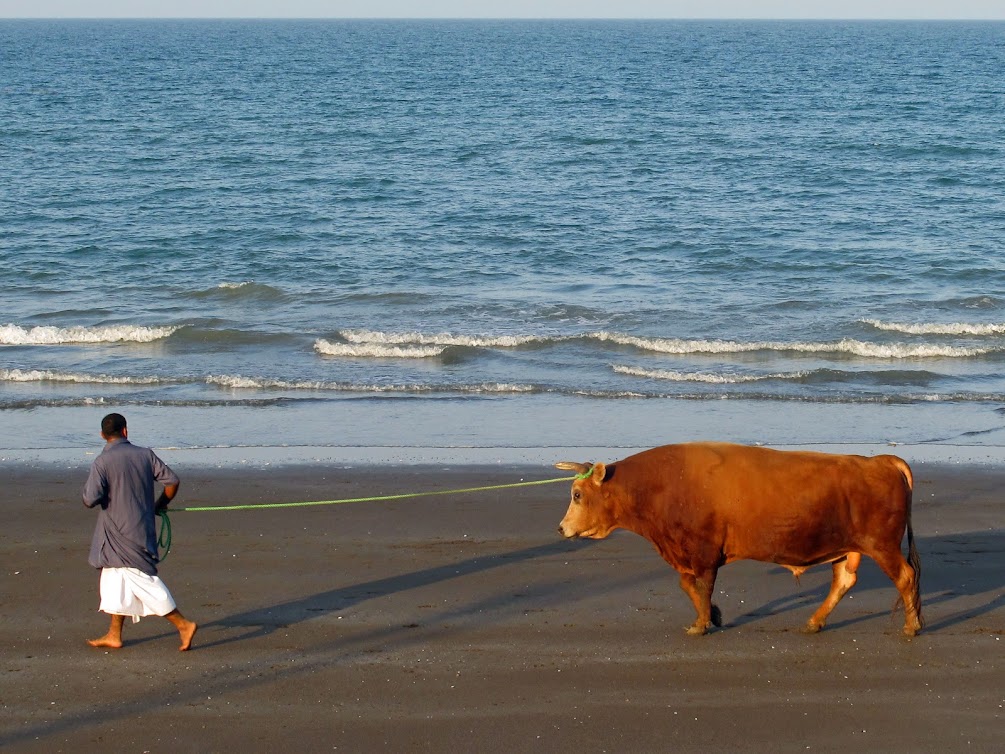 After a couple of days in wonderful Sohar, we went with a ‘long distance taxi’ all the way to Muscat, the capital of Oman!

Muscat is situated on a long narrow strip of land between the sea and the mountains range, it’s about 50 km long and often known as «the three cities» due to the long distances. (Muscat, Mutrah and Ruwi).

We decided to stay in the historic Mutrah and the Mutrah hotel which is Oman’s oldest and first hotel. A great choice situated close to the mountain range only separated by a local neighborhood with its old buildings and narrow cozy streets, the way you think it used to be in the old days everywhere in the Middle East..Loved it!!
Just a short stroll from the hotel you’re in the middle of the Old Town, and within easy walking distance you find the Mutrah Corniche, Antique Mutrah Souk, Mutrah Fishmarket, Mutrah Fort and Sultan Qaboos Harbour. Perfect location & hotel!!

Mutrah feels like a small fishing village, and has a beautiful corniche along the sea. We walked along the corniche (in 38 degrees celsius) really enjoying the historic beauty of this «village», looking at the traditional boats in the port, several mosques and a couple of nice cafés.
The Mutrah souk was one of the highlights with its Arabic and Indian smell and effects, textiles, antiques, gold etc.

From the corniche it’s just a short taxi drive, or a nice walk when the temperature is a bit lower, to the tiny and beautiful area of Old Muscat, home to the Sultans Palace which is quite special and very beautiful (see the picture!!). It’s situated in a natural harbor surrounded by a jagged spine of hills.

All over Mutrah and Old Muscat, especially by the seafront we could see old forts built around 1580 when the Portuguese occupied the area. All the forts give the place a special and historic feel to it.

Hiring a “taxi” for a couple of days took us to the «new» part of the city, the boring part known as only Muscat, and the huge and marvelous Grand Mosque, quite a spectacular sight!!
The next day we spent much of the day enjoying an amazing beautiful sandy beach at the southeast of the city. The only people staying at this beach except us, were just some young Omani fishermen and their small boats, nice. Wonderful to feel the sand between our toes again, and not to forget; “cooling down” in the clear water. What a great way to end our stay in Muscat!!

We really loved travelling this amazing country and we’re definitely coming back some day, exploring more of the mountains and the south. Unfortunately like everything, this travel had to end sometime, so after a wonderful time here we had to move on…… 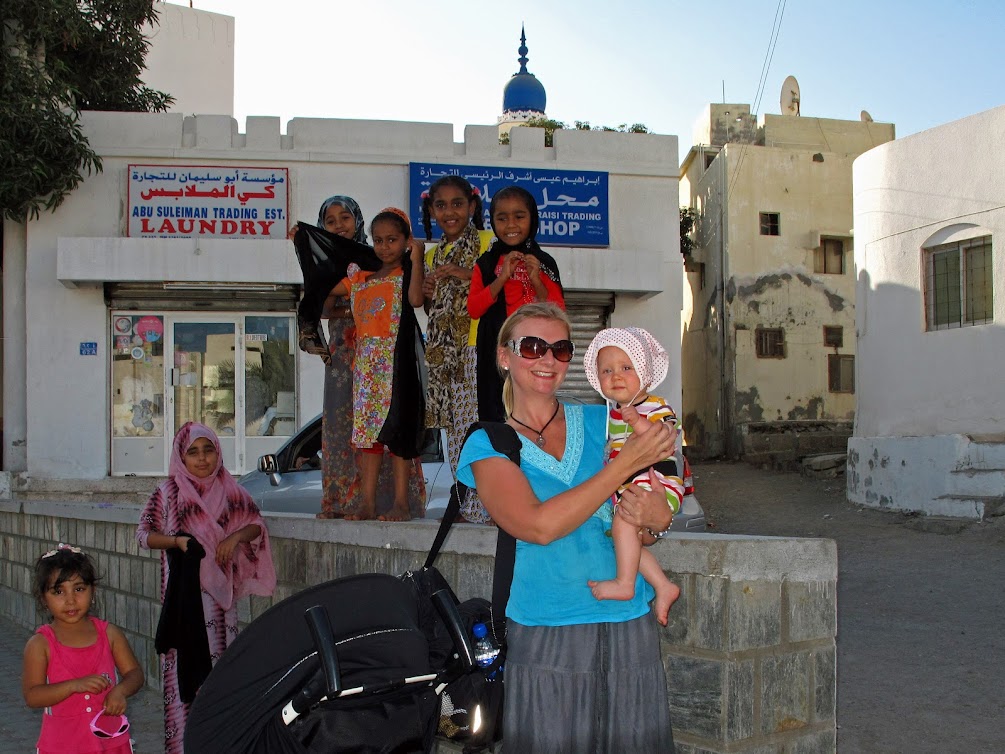 Our tips to other travellers:

Highlights:
Sohar and Mutrah Corniche, Mutrah souq and the beach!
Minus:
Long distances within the cities.
……….
Cost:
Oman is not a place for cheap hotels, but you might be lucky! Mutrah hotel was quite cheap. ( 380 nok / 68 usd pr night)
……….
Hotel search:
www.expedia.com , www.booking.com , www.laterooms.com , www.finn.no , www.norwegian.com
……….
Transport:
‘Long distance taxi’ is really cheap and a very good alternative to the bus (as the bus doesn’t run everywhere and not so frequently). You’ll save plenty of time and it’s a great way to meet the locals jumping in and out of the taxi along the way. The *Long distance taxis’ don’t always appear as a normal taxi, but very often as a private car.
……….
Babyfriendly ( barnevennlig ):
Our baby girl was 8 months during our travel in Oman.
We looked for babyfood, dipers, milk powder etc. and the selection is ok at the supermarket like Carrefour.
The hotel staff is really friendly, and everywhere we stayed we got to check in early with no problem.
……….
Other:
English is not commonly spoken (exept some in Muscat), but somehow you’ll always manage to get by, pointing at the map, showing pictures and smiling while asking for help.

As a woman you should dress modest, and don’t go swimming in bikinis!! Wear shorts and t-shirt and no one will stare while you’re swimming.